The year 2012 has come to an end, and it seems that smartphones and tablets have also made some major headlines in the tech community. Laptops have seen their heyday of fame, and smartphones continuously charge ahead, experimenting and heaping on all sorts of new features. Tablets have traditionally (asides from being free of cell phone spyware and cell phone tracking problems) fallen in the middle of these two gigantically successful gadgets. They have had to somehow carve out niches for themselves- – which is a heck of a task when we realize that an extra half-inch here and you have yourselves a smartphone, or even a phablet as new trends seem to dictate. 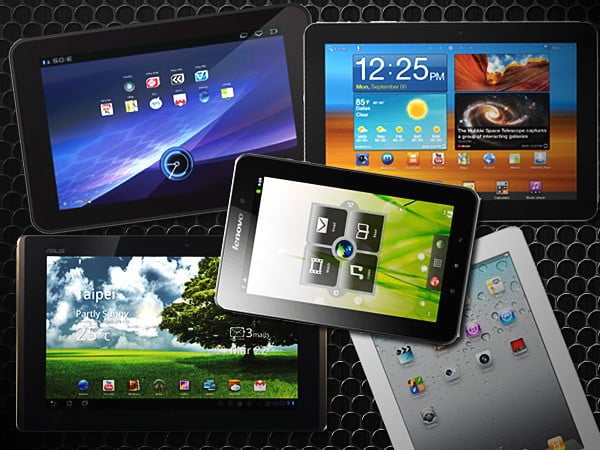 1. Google Nexus 7 and 10. Google has already been putting out some good phones, and with the Nexus 7 this year, we saw Google put some of its expertise into the tablet world. Of course, this is done with Asus, which is already a well-known name and may have contributed to the Nexus 7’s success. The device has received pretty good reviews and has not only given some cutthroat competition but dethroned Amazon’s Kindle Fire. After the popularity of the 7-inch tablet, Google also released the 10-inch one, which is just as popular. Definitely, this year’s surprise hit.

2. Apple iPad Mini and iPad with Retina Display. Now Apple has been dominating the world of tablets for some time, which has been no different this year. As far as the iPad mini goes at 7.9 inches, the attempt was to compete with the 7-inch tablets offered by Google and Amazon. The third version of the iPad came with a 9.7 inch IPS technology. Of course, the crowning glory was the Retina Display, which outnumbered the iPad 2 by roughly four times and that on an HDTV by about a gazillion. According to Apple, it’s the best display to hit any mobile device. So far, this seems to stand true though it may not be in 2013.

3. Kindle Fire HD 7 and 8.9. The upgraded version of the original Kindle Fire came out this year as somewhat attempting to continue the storm that Amazon threatened to bring after some success with their Kindle Fire 7. Kindle Fire HD was added to the mix. The coming of the 8.9-inch version soon followed suit and seemed to fare just as well. Probably the most memorable happening regarding the Kindle Fire and its release was Amazon’s claim that the tablet’s Wi-Fi offered 41% better streaming and downloading than the iPad. Talk about staking out the enemy.

4. Microsoft Surface. Microsoft is an age-old name. Most of us have been hearing it since we were children, but what we had never heard before this year was that Microsoft produced tablets- – because they obviously didn’t until now, that is. Instead, they had hired manufacturers to produce systems running Windows. It seems with the launch of Windows 8, Microsoft needed to pull out the big guns and supply some tablet ammo as well. The Surface tablet line has 10.6-inch displays, runs the Windows 8 OS, and is a pretty funky-looking pair of devices.

5. Samsung Galaxy Note 800. The Note 800 is originally the product of Samsung’s successful line of phablets and is designed to be a pure concentrate tablet for fans of Samsung and the device. The tablet’s specs are nothing less than stunning, as one can expect from the manufacturers; a 10.1-inch display (1280x800pixels), quadcore processor, multiscreen feature as well as an S-Pen.  With all this packed and ready for users, it seems that Samsung has decided to become a definitive player in the tablet market after conquering the smartphone one. How it fares, next year is definitely yet to be seen.

Author Bio: Jessica is a known figure in the field of mobile apps. Her informative work regarding computer monitoring programs has been of great help to readers, earning her a large fan following. For more details, check mobistealth website.